Those of you following my blog have probably noticed how OBSESSED I've become with games lately.  It's a serious addiction!  Haha!  But I've recently realized how AMAZING games can be as educational tools. - And that's for the kids AND me!  I've learned a lot from gameschooling!  So I thought I'd share some great educational card games from the fabulous Looney Labs! 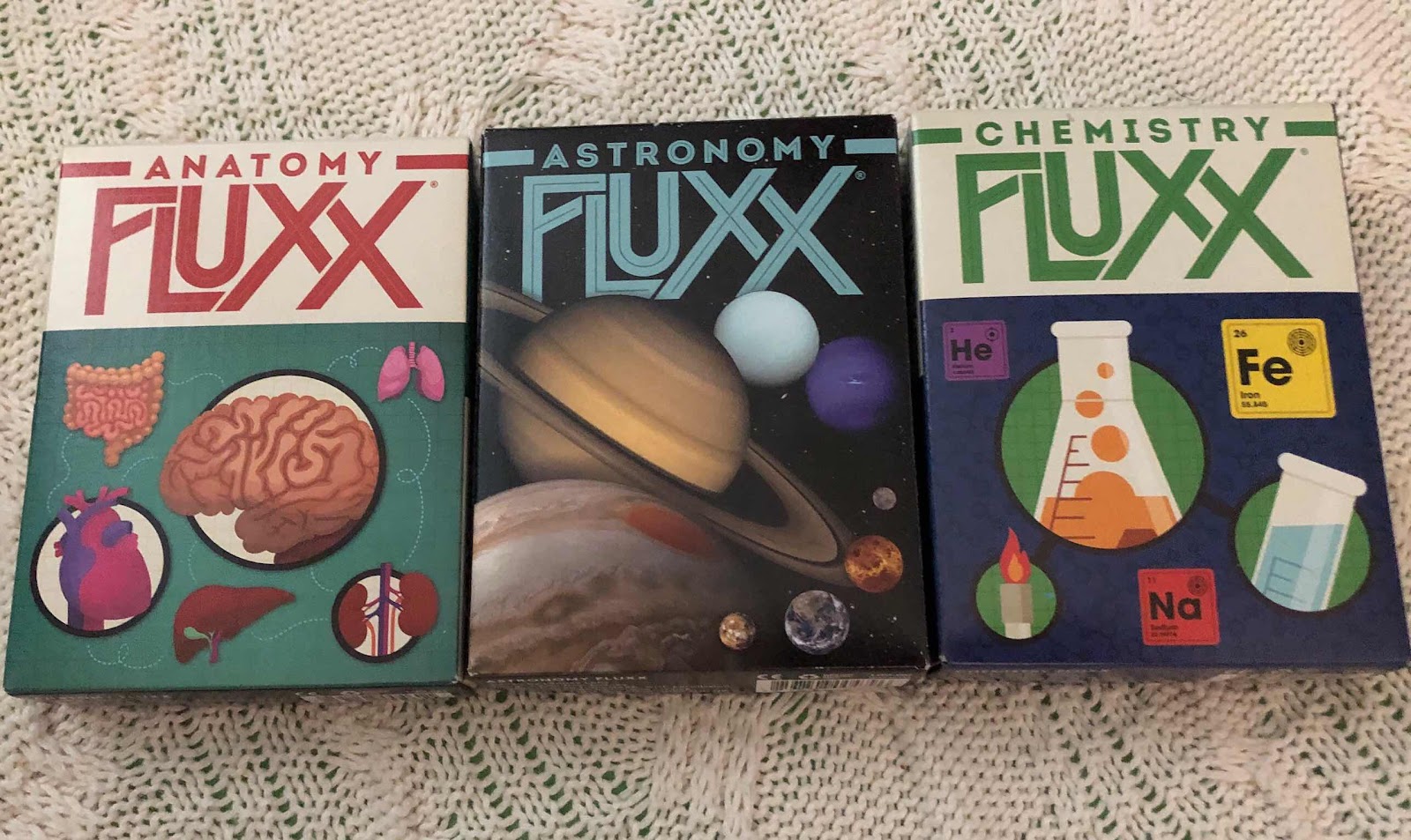 Looney Labs has a ton of amazing and fun games! Their Fluxx Games are hugely popular, and that's what I'd love to share with you today!  There are tons of fantastic titles, but I'm super excited about their science versions!  They are a great, simple game to play while studying Chemistry, Astronomy, and Anatomy!  So let's take a look! 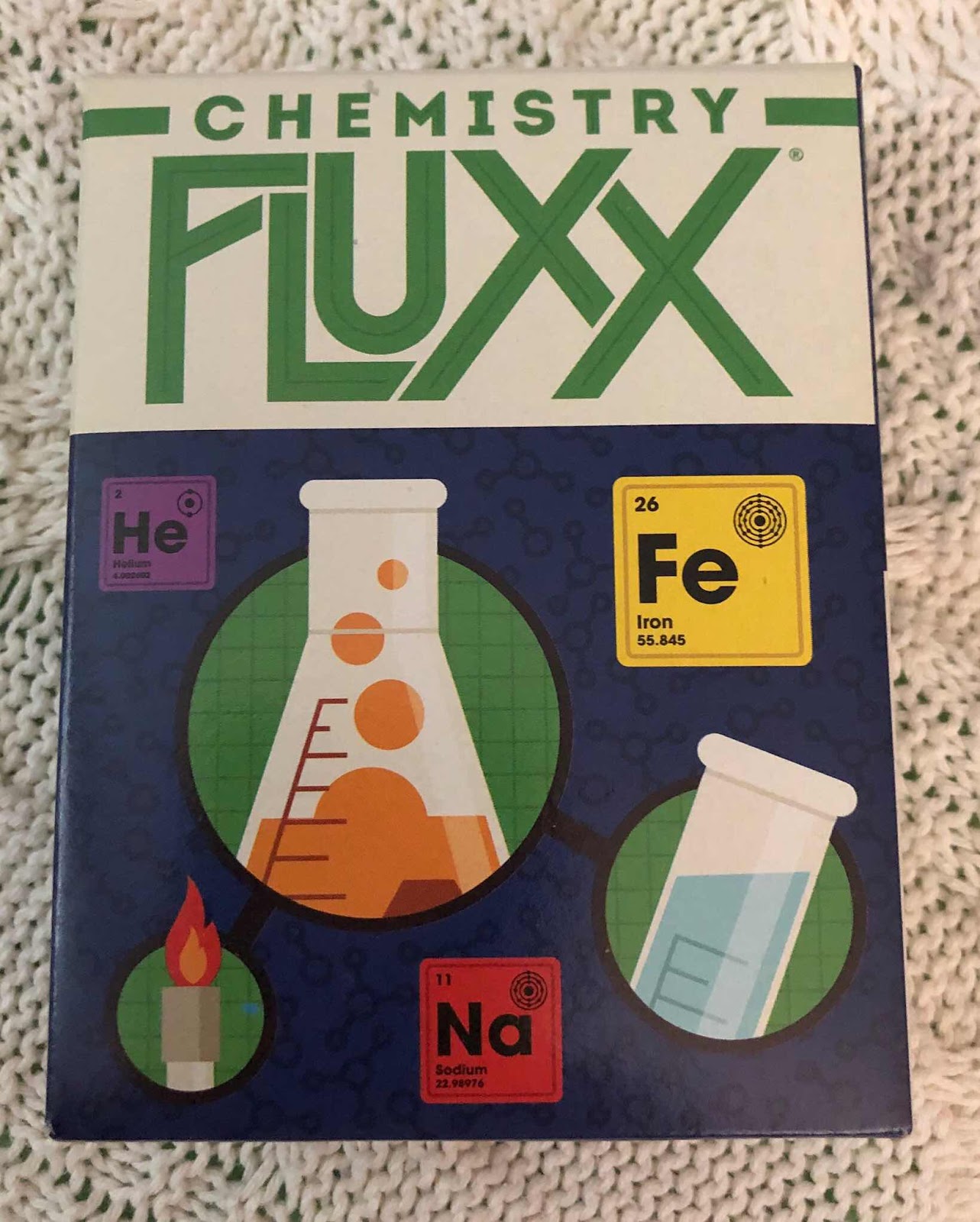 Like all of their Fluxx titles, Chemistry Fluxx is a game where the rules are constantly changing, or "in fluxx." Not only that, but the goal (what you need in order to win) is always changing.  Now this may seem complicated, but it really isn't!  It takes a little time to get used to a game where the rules are constantly changing, but its actually a very simple concept!  And there's not much that you have to remember, because everything is written on the cards! 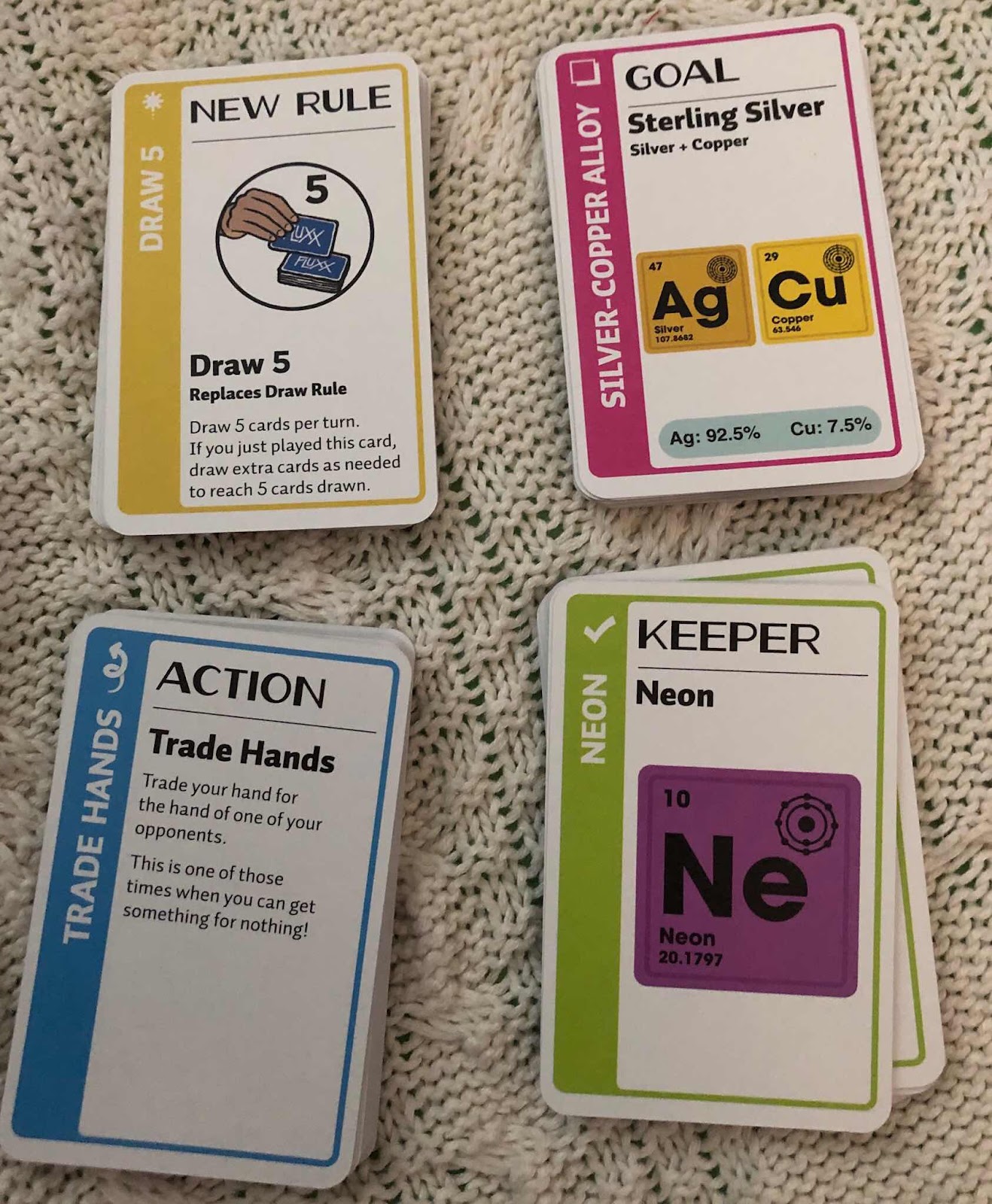 What I love:
1.) The chemistry theme! - My kids (5-9 years old) will be learning about the periodic table next year, so this game is very timely!
2.) It's simple enough for kids to play!  - As long as your child can read, they can play this game!
3.) There are no "Creepers." - Some of the Fluxx games have cards called "Creepers" that add a new level of difficulty to the game.  While I enjoy the "Creeper" cards when playing Fluxx versions with my hubby, I'm glad this game doesn't have them.  It makes it more accessible for younger kids.
4.) The colors! - The colors are bright and cheerful and I always love that!
5.) The Goal cards are fun! - Every Fluxx game has goal cards.  The goal card is tells you what keeper cards you need in order to win the game.  What I love about Chemistry is that many of the goals combine elements to make compounds.  For example, your goal card might be Silver and Copper (to make Sterling Silver) or Nitrogen and Oxygen (to make Laughing Gas). 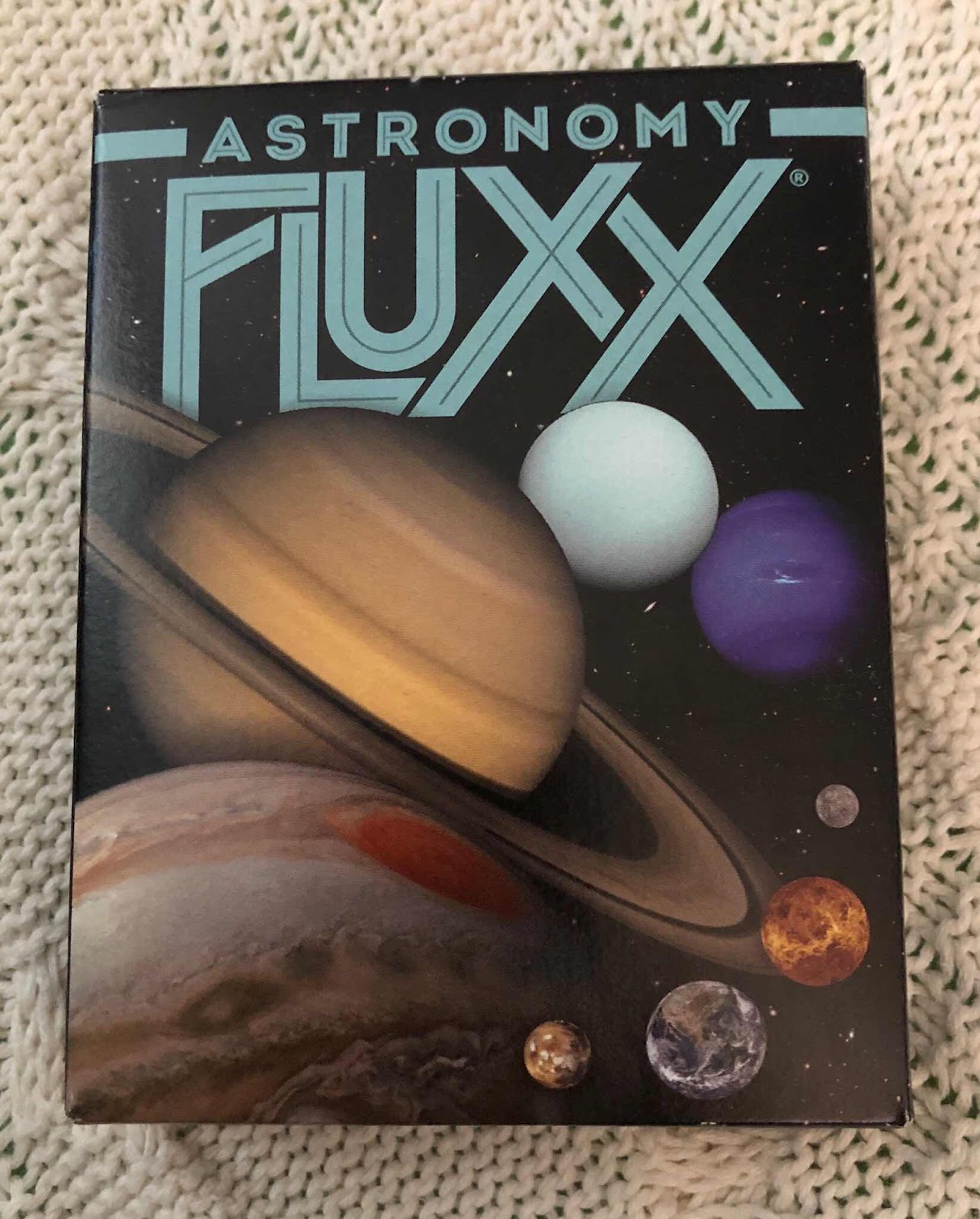 This is one of Looney Labs' newest Fluxx games and it's so much fun! Its beautifully illustrated! 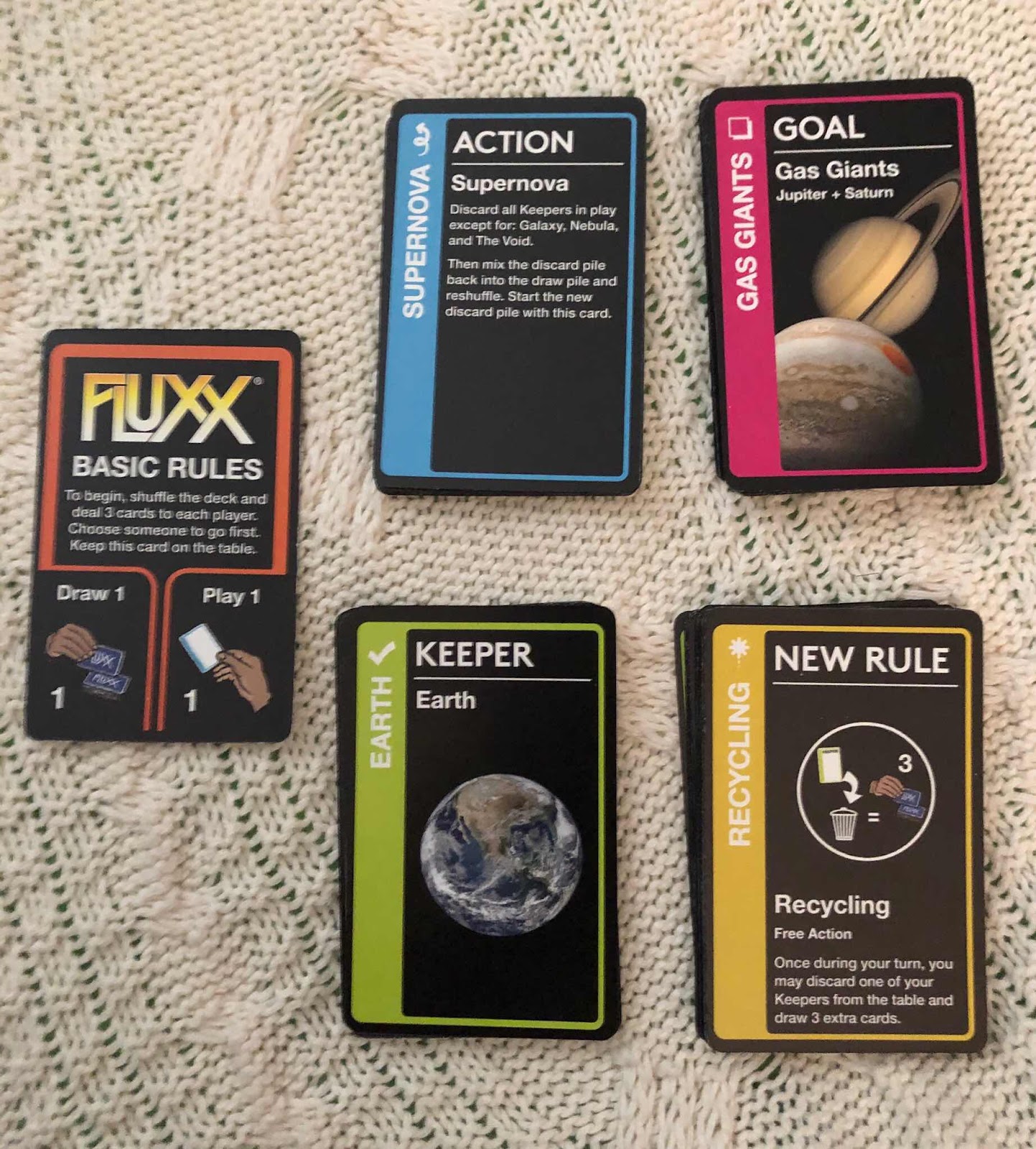 What I love:
1.) The astronomy theme! - We studied the planets and the solar system this year and this game was a perfect fit! Just playing the game with help your kids memorize the names of the planets and familiarize themselves with what they look like!
2.) Simplicity! - Again, it's simple enough for kids to play!
3.) No Creepers! - As I mentioned earlier, this makes the game simple for even younger kids.
4.) The design! - While the Chemistry Fluxx cards have a white background, the Astronomy Fluxx cards have a black background.  While that may seem like a simple change, it really gives these cards a great "sci-fi" feel!
5.) The Goal cards are educational! - The goals in this game help kids learn things like: which planets are the Gas Giants, what planet is closest to the sun, which are the outer planets, which are the inner planets, and more! 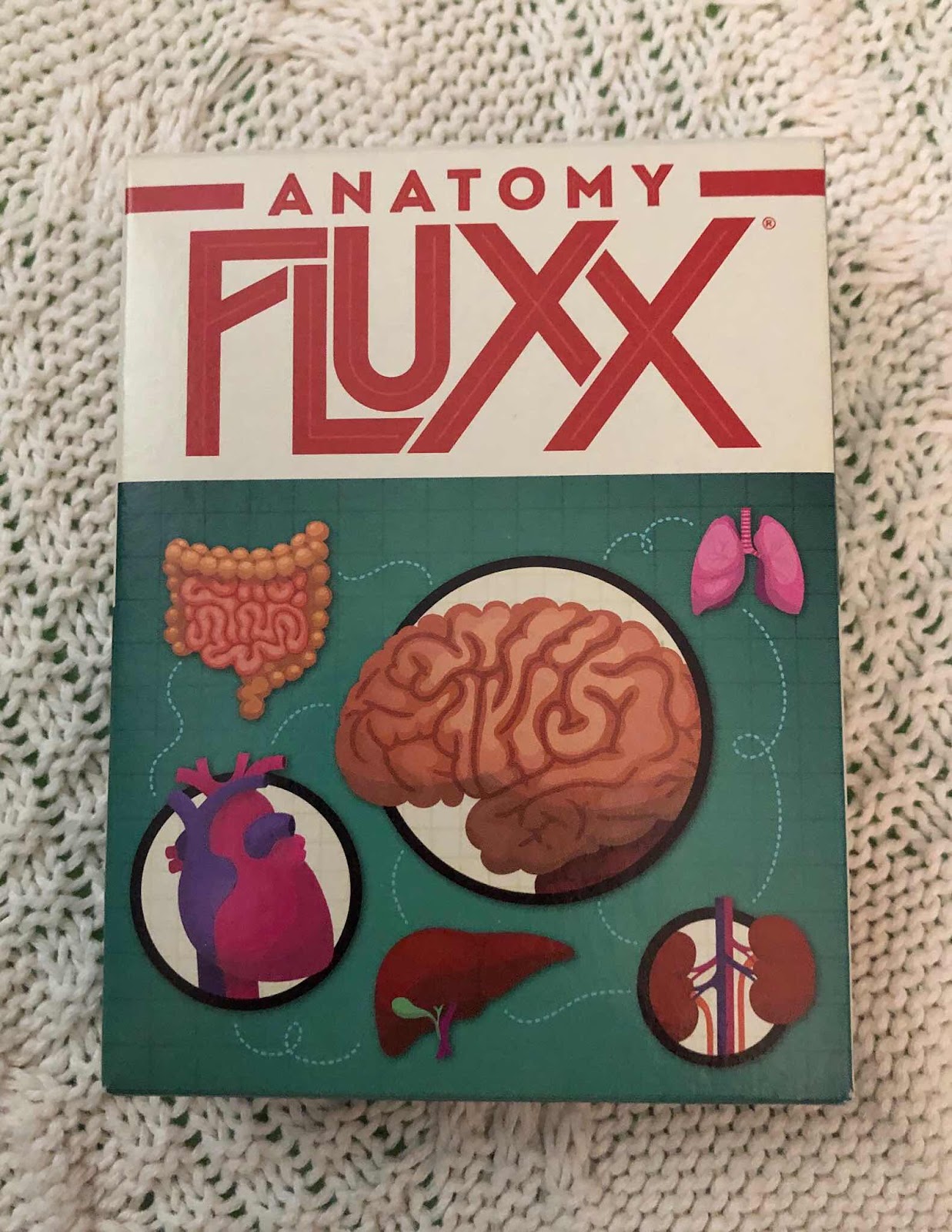 This game has a little higher age on it for a couple of reasons. 1.) There are Creepers and Ungoals in this game.  This adds a little extra level of difficulty to the game, although its still simple to learn and play! 2.) Its discusses some organs - including reproductive organs - that may make it better for a slightly older crowd. (But its not graphic or inappropriate by any means.  Its very clearly anatomy based.  Its really just up to each individual parent as to what are they think its appropriate for.) 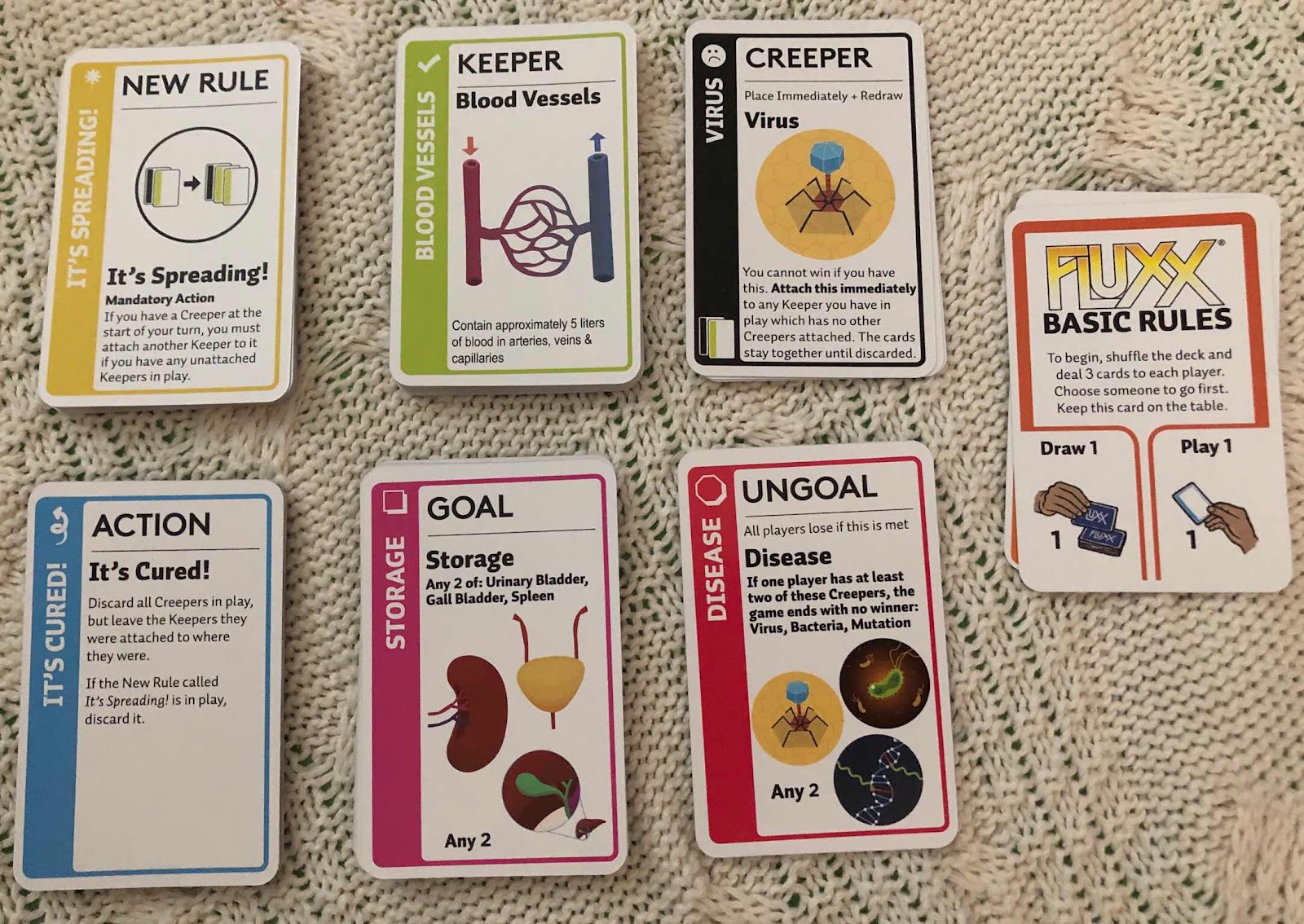 What I love:
1.) The anatomy theme! - We'll be studying the human body next year, so this is great for those lessons!
2.) Creepers! - While I love that Astronomy and Chemistry Fluxx have no Creepers and are very simple.  But I also love that this game - which is marketed fr a slightly older crowd - does have a little extra level of difficulty and challenge!  The creepers (cards that can keep you from winning) are also very thematic!  Things like viruses, bacteria, and mutations!
3.) The illustrations! - I love the illustrations of everything from the heart and kidneys to blood vessels!
4.) Educational value - The goals teach you things like: which organs are responsible for storage, what organs are involved in the female reproductive system, which organs work as filters, and much more!
5.) Factlets! - The Keeper cards have factlets at the bottom that explain more about that organ, system, etc!  This is very educational!
6.) Name that Organ rule! - There's a rule that states that before you play a Keeper (lay it down in front of you), you read out the factlet at the bottom without naming it.  If the next player correctly names the organ, they get to draw an extra card immediately.


I received these games, free of charge from Looney Labs, in exchange for my honest review!

Posted by TheProverbs31Mama at 1:52 PM

If you would like me to review your product or service, you can email me at: (Please place your product/company name AND "Blog Review" in the title line.)
theproverbs31mama@gmail.com

Check Out These Other Great Mama-Bloggers: